BitBay: How Has The Worlds Most Advanced Cryptocurrency Software Gone Unnoticed?

Amidst the constant stream of new crypto projects, BitBay has been consistently adding features to what might be the most awesome and secure wallet in the cryptocurrency space. Lead developer David Zimbeck, known for creating BitHalo/BlackHalo, has been working quietly over the past two years improving and updating the software suite. The software supports an entire smart contracting interface with decentralized markets as well as many other features.

The real question is, “How has the worlds most advanced crypto software gone unnoticed?” Unlike other projects with empty promises, BitBay delivers. The features are plentiful and fun to use. Just downloading this software will reveal it is a cryptocurrency playground. It’s not vaporware, it is working and most of its important features can already be used today.

The main feature is its “unbreakable contracts”. These are contracts that can be applied to the real world in an important way. Unlike Ethereum, these contracts have the advantage of being secured by collateral deposits from both parties. Regardless of the contract details, this makes them unbreakable because both parties have their collateral at stake. If the parties don’t honor their word, the deposited funds are burned. This makes theft and deception illogical since the dishonest party would simply lose money if they chose to exit the contract. With this system there are no arbitrators, biased third parties, escrow or even any fees. This software simply eliminates the middleman in every industry in one stroke.

The repercussions are endless… it can create coins for cash contracts like a decentralized “Local Bitcoins”, where the cash payments are completely trustless. It can create employment contracts where the employee is forced to be honest about delivery time, credentials and hours. It serves as a “decentralized eBay,” where users don’t have to worry about receiving faulty products or empty boxes because the contracts are unbreakable forcing the parties to work together. BitBay even creates Barter Contracts where people set up a “wish list”, and can trade any item off this list, including things like gold for silver, corn for wheat, or any imaginable goods and services. 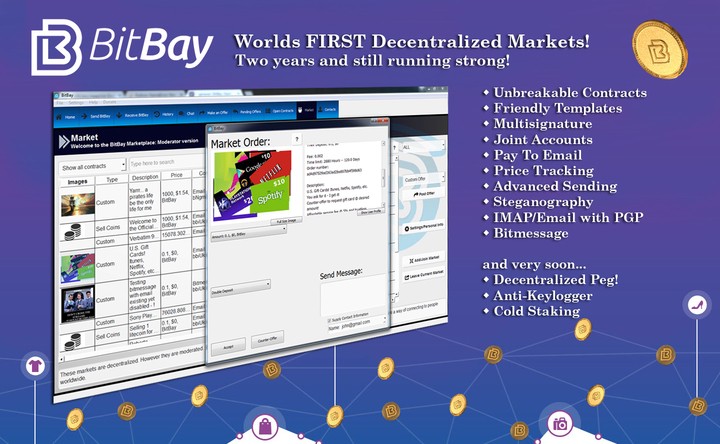 Another important feature within BitBay are the user friendly templates to help anyone create their own contracts by entering a few simple details. Some of these contract templates are already working, and more are planned in the near future. Using the “Custom” template, you can structure any deal you want. “Use your imagination,” David Zimbeck encourages BitBay’s users, “agreements for anything from employment to barter, and even to trustless binary options or gambling can be created.” The “Cash for Coins” template automates the buying process, and has allowed many users to already successfully complete cash deals using BitBay, without the need for a middleman or escrow. In the future, the “buy/sell anything” template will have reverse and regular auctions with a variety of shipping choices.

How is it that a single developer can deliver such an incredible suite, when entire teams of coders have a hard time even delivering a functional wallet? How on earth has this project gone unnoticed, and why is it not in the top 10 coins in the world?

Many people either discarded or forgot about the project after the original founders abandoned it. At that time David was only a hired developer, but when he saw the founders leave, he had no choice but to step in and code all the promised features… and he has done this all without financial support. David prefers to work alone, claiming he is able to code faster knowing every line of code inside and out, and good, reliable coders are hard to find and train. Where other projects spend much of their resources on marketing, BitBay has spent it’s resources on coding and testing. Now that the bug hunting is mostly done, resources will begin to be reallocated towards marketing. Expect to hear a lot more about BitBay in the future.

This software is all action and no talk… and it’s not just the smart contracts that make it amazing. BitBay had the world’s first decentralized markets a full year ahead of “Open Bazaar”. The markets have no server, are anonymous and are built right into the client. Users can create their own public or private markets, or just check all the different kinds of contracts in the main market. The software communicates between users by integrating email like “Thunderbird,” and also uses decentralized email as an additional option with Bitmessage. Everything is automated in the contract templates, including price tracking and various features in escrow. BitBay also has “Pay to Email,” which uses ‘Steganography’ to hide payments in photos to the recipient’s email. David created this feature to be used for tipping purposes, but it has many other uses as well. The two encrypted keys for the wallet provide unbreakable security and can also be hidden in images. A user can even use the two keys on two separate computers to sign transactions. This dual computer feature lays the foundation for BitBay and BlackHalo’s much anticipated “Cold Staking” feature. Cold Staking allows users and exchanges to stake using two computers, making the account virtually impossible to hack. This update will also allow for “exotic spending” such as “locktimes” which makes BitBay one of the first programs ever to give a user friendly way to interact with these special types of payments. This means users can create a “dead man’s switch,” “parking of coins”, “burn” and other types of spending directly in the client. It also supports automated joint accounts for business partners and spouses, and it translates to 92 languages.

The star feature, the “Dynamic Peg” has gotten everyone excited and it is scheduled for release later this year. This game changing advance will obliterate volatility once and for all, by allowing freezing and unfreezing of the BAY coin supply via voting. The net result will prevent pumps and dumps, but still allow long term price growth and effectively revive the entire project.

So there you have it. People are so new to cryptocurrency that most are still just using online wallets are getting used to simply “sending and receiving” their coins, while they wait for other projects to deliver on their unfulfilled promises. BitBay’s working client takes things to a whole new level. It has virtually created its own market economy inside of the software. Although BitBay may not be mainstream yet, the community is vibrant and the team is always willing to train new users to use the client. One of the BitBay team members even made his own “contract faucet” giving out free coins using a unilateral “Guarantor” contract to whoever accepts it. Eventually, once the smoke clears and more people start discovering and exploring crypto currency, they will be looking for mature projects with real-world potential. When this happens BitBay will attract more attention. For a long time now, traders had to invest in roadmaps because there really was no alternative. Now that BitBay and a few other projects are maturing and demonstrating the power of the technology, investors are likely to change their strategies. After all, why risk money on promises when there are projects already delivering finished products to the crypto world?