What you need to know about smart contracts in banking 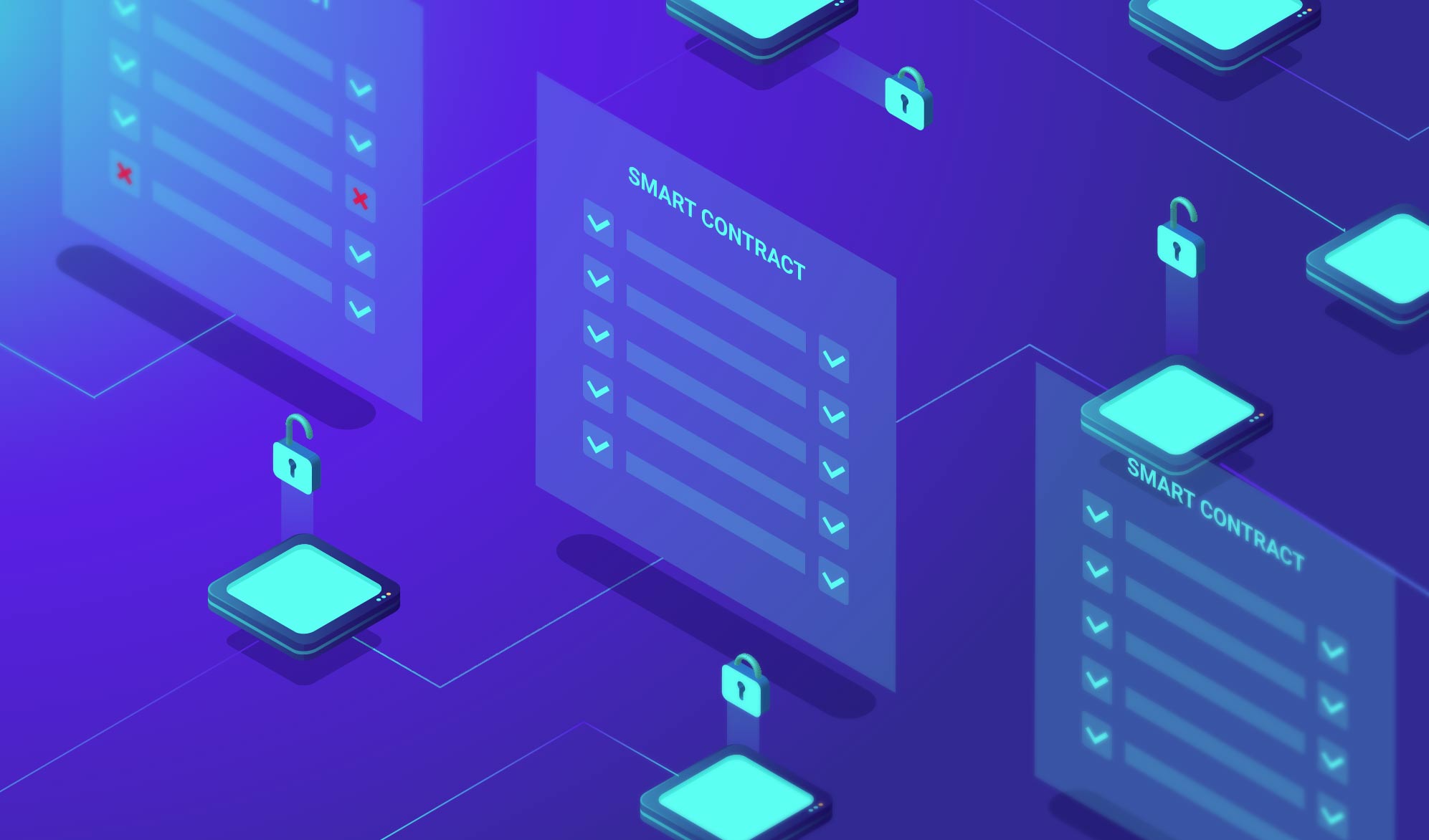 The banking and finance industry, despite skepticism about Bitcoin, has come round to the idea of blockchain. And the sector is also now waking up to the potential of smart contracts.

But the scope for steam-lining all sorts of bank-intermediated services using smart contracts goes much further, with reduced complexity and bureaucracy offering potentially huge cost reductions for banks, and lower fees, faster processing, and less paperwork for customers.

Along with cost advantages and improved user experience, perhaps the bigger payoff is that these technologies offer the prospect of real-time information on the size and composition of bank balance sheets.

What is a smart contract?

A smart contract encodes a set of terms and conditions entered into by counterparts to an agreement and then executes the terms of that agreement automatically once those conditions are met. The contract is self-enforcing without recourse to a third party.

Add smart contracts to a distributed ledger and it becomes possible to decentralize many of the most commonly used functions of trusted financial intermediaries.

Automation of transfers of funds, lending decisions and loan servicing, compliance work, insurance, will writing, securities issuance - in principle, all of these can be performed by smart contracts.

Use cases of smart contracts in banking

Shared access to borrower information and digital versions of land registry records and title deeds could facilitate automated execution of the entire lending process, from the application stage, credit risk assessment, the extension of mortgage lending and transfer of property rights, and even mortgage servicing and securitization thereafter.

Smart contracts could replace the need for the time consuming and complicated legal documentation involved in onboarding new banking customers to adhere to KYC processes. Customer information could be readily verified against records held on the blockchain. This, in turn, could satisfy conditions to unlock further smart-contract based services.

The process of clearing and settlement, whereby all payments and transactions are matched and verified comes with high administrative costs. These are eliminated outright if agreements are executed autonomously on a blockchain.

In fact, regarding this last use case, the Australian authorities have plans underway to replace the country’s existing securities clearing house, Clearing House Electronic Subregister System (CHESS) - an electronic ledger of securities holdings which facilitates the transfer of ownership between market participants - with a blockchain-based platform developed by Digital Asset Holdings.

Disintermediation of banking and finance

By implementing decentralized consensus protocols, banks may ultimately disintermediate themselves from many of the services that have, until the advent of blockchain, required intermediation by a third party.

Of course, this does tend to beg the question, who needs banks anyway? It is a fair question. What are banks for, if most of what they do can be done trustlessly on the blockchain?

Custodial deposit-taking functions and payments systems are already being done via consensus protocols. Peer to peer lending, too. And most of the other core functions of banks look set to be disintermediated soon.

The only thing that banks can do, that crypto can’t, is to create money out of thin air at their own discretion. But then, one of the primary motivations for crypto is precisely to take control of the money supply away from established, self-motivated, institutions, and to entrust it to impartial algorithms.

Challenges to the use of smart contracts in banking

It seems likely that many banking processes and legal contracts will eventually be replaced by blockchain-based financial solutions, although this will be a gradual process. Putting the hype to one side, it is still early days for the use of smart contracts in banking, and some major challenges to adoption remain.

For one thing, it will require a combination of legal expertise and coding ingenuity to recreate traditional legal contracts on the blockchain, and compliance officers who understand how all that fits into existing and evolving regulatory requirements.

Clearly, legal and DLT development functions of banks will have to grow in size significantly, while many middle- and back-office administrative functions become obsolete.

Moreover, it seems unlikely that incumbent financial institutions will want to relinquish control of their databases entirely to unknown third parties. More likely, groups of institutions will operate permissioned blockchains, with customers interacting only with trusted nodes, rather than directly with the ledger.

Indeed, this is the route taken by Ripple. Ripple is working with a number of banks to encourage the use of its XRP token for large-scale interbank payments.

Clearly, the operational risk for banks here are massive and firms are rightly worried about them. It is entirely plausible to imagine a double-spend attack on a ledger used by financials that could put a big hole in the balance sheet of one, or all, of them.

Such an attack would generate enormous doubt about the solvency of banks. Individual institutions themselves may not know the damage done even to their own respective balance sheets, let alone that done to others’. These were just the conditions that led to the global financial crisis and should be avoided.

To mitigate the risk that bad actors take control of the chain, rather than operating a fully decentralized ledger, the XRP blockchain is maintained by around 70 permissioned nodes. Users can choose to direct transactions through any of these, although the default is for confirmation to be done by the five recommended nodes operated by Ripple.

It is not a popular approach with decentralizing die-hards. But it would be a brave Chief Risk Officer who chose to gamble a bank’s capital on the prospect of efficiency gains from a still largely untried technology. (This is what’s called an ‘unpopular opinion’ in the crypto Twittersphere.)

In principle, smart contracts can be written on the Bitcoin blockchain. But over time the development of Bitcoin has focused on its use as a digital currency. And its lack of Turing completeness - a short-cut taken to reduce the burden on miners but which makes infinitely looping logic statements a possibility - makes smart contracting challenging.

Whereas, from the outset, Ethereum has been designed to support smart contracts. Unsurprisingly then, Ethereum is currently the industry standard. And there are many projects currently underway in the financial sector that are experimenting with the Ethereum blockchain. Whether this will remain the case is uncertain, however. There are reasons to suppose another smart contracting platform will emerge.

In part, that’s due to well-publicized problems arising from chain-bloat on the Ethereum chain. As the volume of traffic grows with each new ERC based token, it becomes more and more resource intensive for its miners to cope with the large amounts of information requiring confirmation (even downloading a full node, at more than 1TB, is challenging).

Moreover, there are ethical concerns associated with all proof-of-work cryptocurrencies, of which Ethereum is one. The energy demands of those providing the computational hash power needed to maintain the integrity of the ledger are huge.

It would be irresponsible for the financial industry to settle upon a consensus protocol with such dire environmental implications when there are plenty of other much greener options available.

Besides, it’s worth noting that most, if not all, major 51% attacks have been executed against proof-of-work cryptocurrencies.

Another issue for banks and many individuals is the need for privacy. On a public ledger like Ethereum, or Bitcoin, all transactions are visible, and all wallets are observable. This poses considerable disadvantages for many legitimate activities that require confidentiality.

For instance, suppose a corporate has agreed to bridge a loan to take over another business, with the drawdown of that loan to be executed via smart contract if the takeover is successful. Rivals and the target itself may be able to observe the cost, size, and conditions attached to that bridging loan. Similarly, for a home buyer in negotiations for a house. Hardly ideal.

The point of these examples is that total transparency can sometimes result in an uneven playing field. It might also make particular individuals or institutions targets for criminals.

Decentralized solutions to these problems are in train, however. Privacy coins like Monero obfuscate the details of transactions and wallet addresses to preserve the confidentiality of counterparts to a transaction.

Moreover, privacy-driven protocols are being developed that support smart contracts. Dero is one such project, implementing smart contracts using the CryptoNote protocol, on which Monero is based. The Dero team’s roadmap show this is due to hit the test net later this year.

Outside of the financial industry, many more uses of smart contracts are being implemented. Our own David Zimbeck was the first person in the world to code contracting software in BitHalo, a year ahead of Ethereum. This platform has evolved into BitBay, the decentralized blockchain marketplace.

The foundation of BitBay is a smart contract that governs the release of funds from a double deposit escrow account. This basic building block ensures that both parties to any agreement act honestly.

On top of this, a host of other smart contract based functionality becomes possible: buying and selling of coins; buying and selling of goods and services; auctions; reverse auctions to conduct tenders; fiat payment, crypto payment, and barter; and fully customizable templates to write your own terms. All this, already, without the need for a middleman, for free.

Where next for smart contracts?

The blockchain decentralizes the ledger of ownership, obviating the need for deposit-taking institutions and payment systems, as user balances and transactions are stored safely on the ledger. Its immutability offers great security advantages over centralized databases.

The integration of smart contracts into distributed technology increases the potential of blockchain manifold. It enables cryptocurrency to transcend the uses of simple fiat money; it is smart money; it can do things.

That opens up the possibility of an array of new services. These are most apparent in decentralized banking and finance - an entirely natural extension of the money-like quality of crypto, and its inherent functionality as a payment system.

But the potential use cases do not stop there. Indeed, banking and finance is just one industry, one set of terms and conditions that can be codified and automated. Many more are waiting to be implemented. And many more have yet even to be imagined.

The more economic activity can be conducted on the blockchain, and the greater the interoperability between different chains, and between blockchains and the fiat economy, the greater the benefits to everyone.